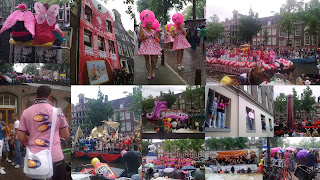 The gay parade in Amsterdam is, like football, a public excuse to party and drink on the streets. People of all ages – literally from infants to octogenarians stream alongside the main canal, Princengracht, where the boats go in procession. Not only of all ages, but all ethnicities and sexual orientations too. Accompanied by peppy music, soap bubbles, confetti, and much gyrations, showing much skin, not bothering with little things like grey skies and rain.

I find myself part of the celebrations, this time because I have company – Ig is a recent addition to the developers’ apartment where I’m temporarily put up. Like me, he is new to Amsterdam, and happy to have company to wander about with. We set out in the morning, see the science museum and the central library and then head for the parade. We walk a lot before we finally find a spot by the canal side from where we can peek through the front row of people and catch some of the action.

The action consists mainly of boat-loads of people dressed in varying degrees of skimpiness, many cross-dressed too, and all united in a pro-gay theme. Variations include boats for the aid of cancer research, boats collecting money in “fishing nets” for the fight against AIDS… a boat full of NL postal workers, Japanese gays, the police, an exclusive boat of 50+’s…! The party bug has bitten all, whether on the boat or cheering from the sides. The canal is lined with stationary boats, which are the closest by-standers to the parade. These boats are blasting upbeat music of their own, and somehow this blends with the music from each passing parade boat and manages to sound pleasant. For a change, I have not had any form of alcohol, and still the music sounds good. Not to mention the whiffs of pot you catch on the breeze once in a while.

My dad would no doubt dismiss the whole thing as “ding-chak” music of the masses, and a crass celebration of the base, primitive, almost animal nature of man. But what to do, despite having grown up with such ideas foisted upon me (or perhaps because of it!), I now find myself appreciating and supporting those very things.

It never fails to amaze me how the locals take their children (from 0-17!) everywhere – to “coffee shops”, to walk along the red-light district, to gay parades… On the face of it, it seems quite open and “nice to have”, but I do wonder what questions arise and how they are handled. I appreciatively watch mommies dancing with their little 6 yr old sons, or dads carrying their little ones on their shoulders and both swaying gently to the music. It doesn’t matter that a gentle rain keeps falling off and on – umbrellas come out during the more persistent spells, and are put away unobtrusively during the breaks in the weather.

We spend a good couple of hours there, snapping away with cell phones, and finally extract ourselves from the crowds and walk along towards home. Takes another half an hour for the music to finally fade away behind us, as we enter the quieter streets and join the flow of normal life… people catching trams, returning home from grocery shopping…

As I write this, the sky has cleared, fluffy gold-tinged clouds are floating about, and it seems like a different day, different place already.

Here’s a news item about the same parade

My cell phone pics of the parade put up on FB

PS: Do you read my blog anymore? Thought of you today – where, what, how are you now I wonder…

1 thought on “The Pink and Purple Parade”