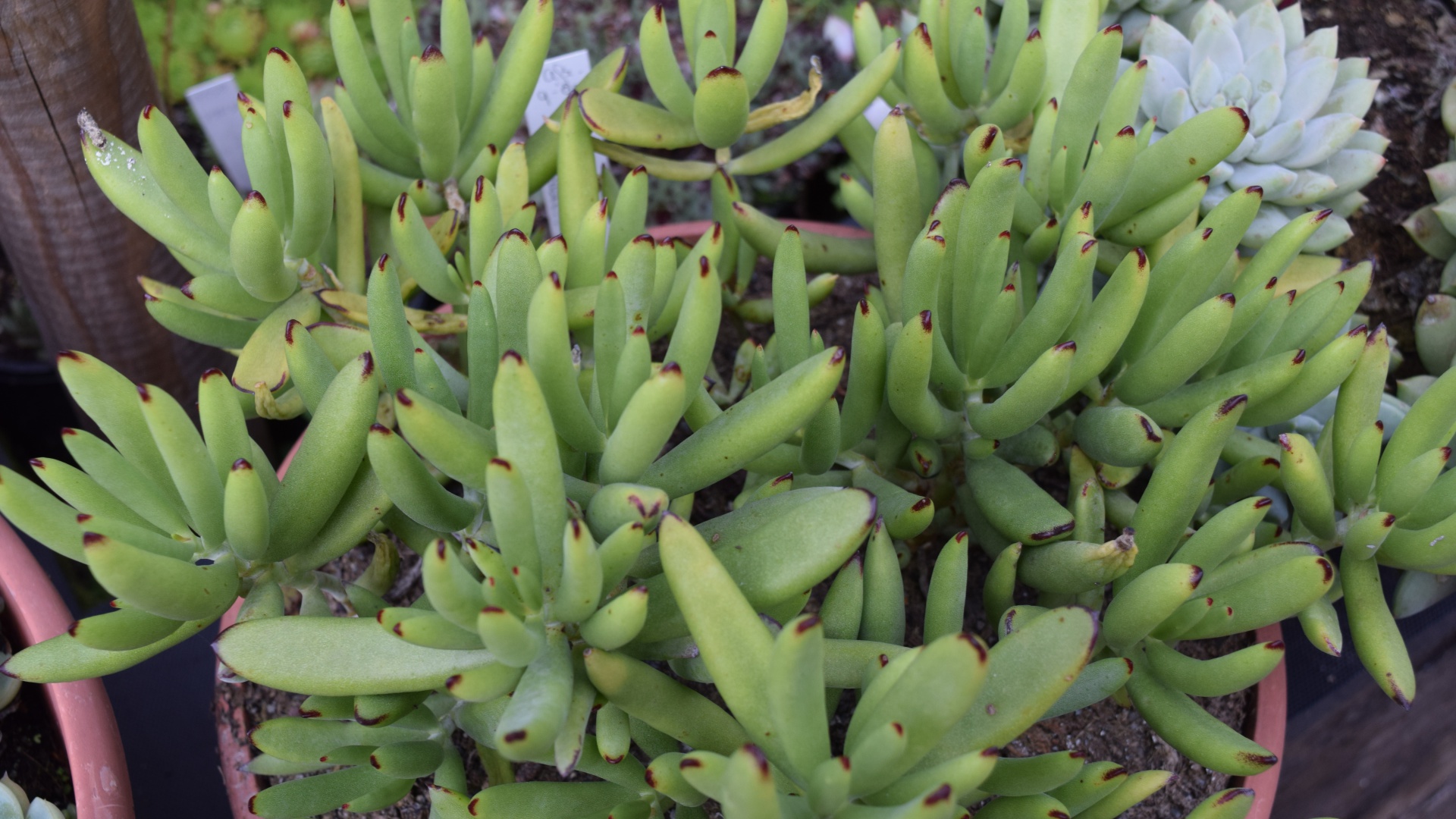 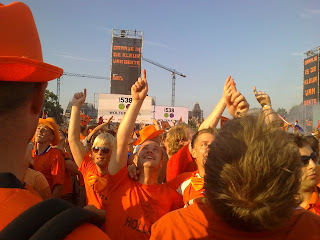 fifa finals sunday. the dutch are in the finals after 30 years… the city’s mood is euphoric.

never have i dreamt of being in the middle of football madness voluntarily… it’s only that my interest most recently got fueled by akash’s. and of course being in amsterdam, you cannot ignore the raging fever.

clad in my best orange t-shirt in a show of solidarity, i set out towards museumplein – where i am told there will be huge screens showing the match live. i naively think i could visit rijksmuseum first, and then saunter out into the square and watch the game. reach there at around 3:30pm, and immediately my delusions of a museum visit are set right – the square is already filling up fast, there’s no way i can wade through to the museum entrance – i suspect it would have been closed anyway – holland in the finals is not an everyday event after all! 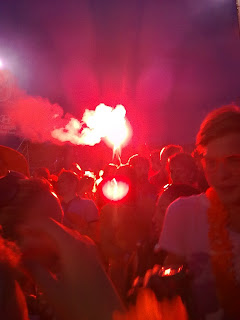 the place has a thiruvizha atmosphere, people have started drinking in the afternoon, and have arrived with huge supplies for the rest of the day. the already bohemian city has gone more berserk – if that is possible! i don’t think i have been in a crowd of this many drunk people ever before – i am told today’s crowd is going to be easily 100,000 people at museumplein.

I find a spot and plonk down on the grass, wondering how i shall pass the 5 hours till the match starts. though I have my book, the atmosphere does not quite lend itself to reading. on an impulse i have brought along a sketching pad and pens/pencils. and it strikes me as the ideal pastime – to doodle! as my page fills up, some people stop to watch over my shoulder, i get a few appreciative nods, thumbs up… i feel a part of the crowd even though i am here by myself. by and by i wrap up my doodling and just let the atmosphere soak in.

suddenly the local fm radio channel is on the air. the dj is playing a peppy and hilarious mix of dutch songs. ranging from the patriotic to what sounds like dutch nursery rhymes, to sound of music (dutch lyrics), to queen with dutch as well as english lyrics! the whole crowd is lustily singing along and dancing. i am quite happy to dance… a beautiful sunny evening, dancing with a million people in a meadow… strewn with empty beer bottles and plastic wrappers. how romantic!

then this cute italian chap starts flirting with me – he is visiting amsterdam, at museumplein with a dutch crowd of 3 guys and 3 girls. introductions all around, then he happily offers me their beer. our friendship is blossoming nicely, when he goes off for a bio break and alas, is never seen again – presumed lost in the crowds. ah well, such is life. however, his dutch friends adopt me as part of their group, ply me with more beer, and a joint (which i politely decline), and gallantly offer for me to stand on their beer crate to see the match… seeing as i am vertically challenged!

a couple of the girls in this group are not much taller than me – and they are having trouble viewing the screens as well. by half time there are two of us standing on the 16″X10″ crate… then in the middle of the second half, a third girl joins us: we watch the rest of the match jostling each other, friendly like.

a few fist fights break out here and there, for whom the rest of the crowd clears some space and watches, not overly concerned. 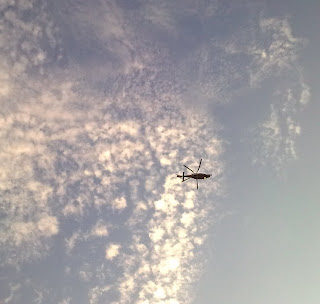 at half-time, there’s this exuberant air show of helicopters circling museumplein, and dropping lots of…. orange gerberas! everyone is waving to the ‘copters, and catching the falling flowers. the dutch are certainly not bashful about their romantic streak! i pick up one of the flowers fallen near my beer crate, and tuck it into my hair band.

the match result is such a let-down. the whole crowd goes subdued… i bid adieu to my new friends and head home.

exiting that square with that crowd is claustrophobic and slow. the roads are overflowing with sad, drunk, oranjes… by now it is 11:20pm. tram service erratic and unreliable now. i join the walking crowd, and start walking in a direction i believe is towards home. i have a map of amsterdam, but where i live is outside of that map! and it doesn’t help that i cannot remember or pronounce intermediate place names. it seems almost anyone i try asking for directions are themselves outsiders.

after panic calls to my local guardian angel i reach a tram stop where i can theoretically get a direct tram – the operative word here being “theoretically”… by now it is 12:20 pm…. the crowds on the street are thinning. i am hungry and dehydrated, pounding headache starting.

two other girls and i decide to share a cab up to a common point. it starts raining now. finally we manage to flag down a taxi, and gratefully fall in. walking the final 15 min stretch, i reach home at 1:10am, exhausted but quite chuffed.

it seems i cannot call a city “home” unless i have walked home in the middle of the night!

5 thoughts on “The Oranje Crowd”